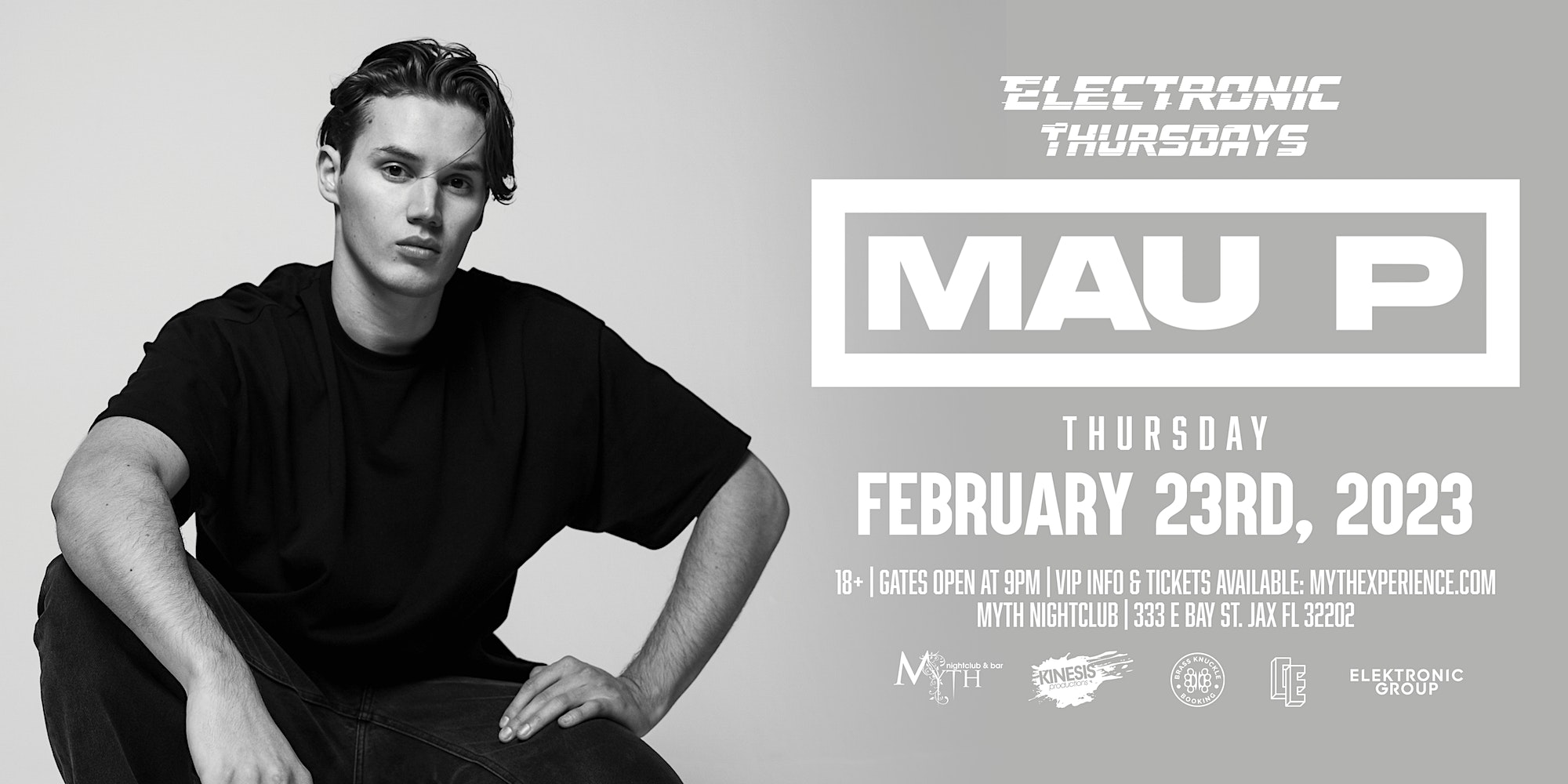 ELECTRONIC THURSDAYS PRESENTS
M﻿AU P at Myth Nightclub
‘Drugs From Amsterdam’ producer and city native Mau P has made a major impact on the house music scene in a remarkably short space of time. Raised in a household full of talented musicians, taking on multiple instruments from a very young age, he found an unconditional love for dance music at the age of 14. He now effortlessly channels his musical skillset, raw talent and boundless creativity into both his productions and DJ sets. He set an incredibly high bar with his thumping debut single, the aforementioned ‘Drugs From Amsterdam’, which rocketed from the underground to become a huge global hit with a staggering 17 million plays racked up in just over a month from its initial release. Combining a throbbing tech house vibe with an infectious vocal hook and even sounds sampled from the Amsterdam Metro in the breakdown, the track cracked the Shazam Top 200 in multiple countries, hitting #5 on the Dutch Shazam Chart and #4 on the Spotify Global Viral Chart.
It also enjoyed major success at radio across the world. Featuring on many national stations like the UK’s BBC Radio 1, and additions to some of the biggest streaming playlists in the world including Spotify’s Mint, Beast Mode and Housewerk. With over 30 million plays on TikTok in addition to this in its first month, it quickly became an inescapable smash. Signed to Lee Foss’ influential Repopulate Mars imprint and licensed to Universal Music—the world’s biggest record label—it has found support from heavyweight DJs ranging from Tiësto to John Summit, David Guetta, DJ Snake, Diplo, Dom Dolla and Wade.
The success of the track has led to him playing alongside Oliver Heldens at his ADE show, and at Repopulate Mars show during the festival. As one of the freshest faces in the underground scene, he will be demonstrating his versatile skills and musical interests across his release schedule, with plenty more anthems waiting in the wings to see the light of day. The next generation of electronic music stars starts here.
CONNECT W/ MAU P
https://www.tiktok.com/@realmaup
https://www.instagram.com/maupmusic/
——————————–
LOCAL SUPPORT TBA
——————————–
Info + Tickets:
Doors: 9PM-2AM
Download the Myth Nightclub iPhone App: mythexperience.com/app
VIP Bottle Specials All Night Long:
Please see the seating chart here : http://mythexperience.com/vip-areas/
Looking to be a vendor at the show?: https://www.mythexperience.com/vendors/
Myth Nightclub: 333 E Bay St. Jax FL 32202 | http://mythexperience.com | 904.330.1964
Myth Gates Open at 9:PM | 18+ Welcome
Element Bistro Open for Drinks and Dinner Starting at 6:PM
http://mythexperience.com/
By Purchasing a ticket, or attending Myth Nightclub, you agree to the Covid-19 Terms