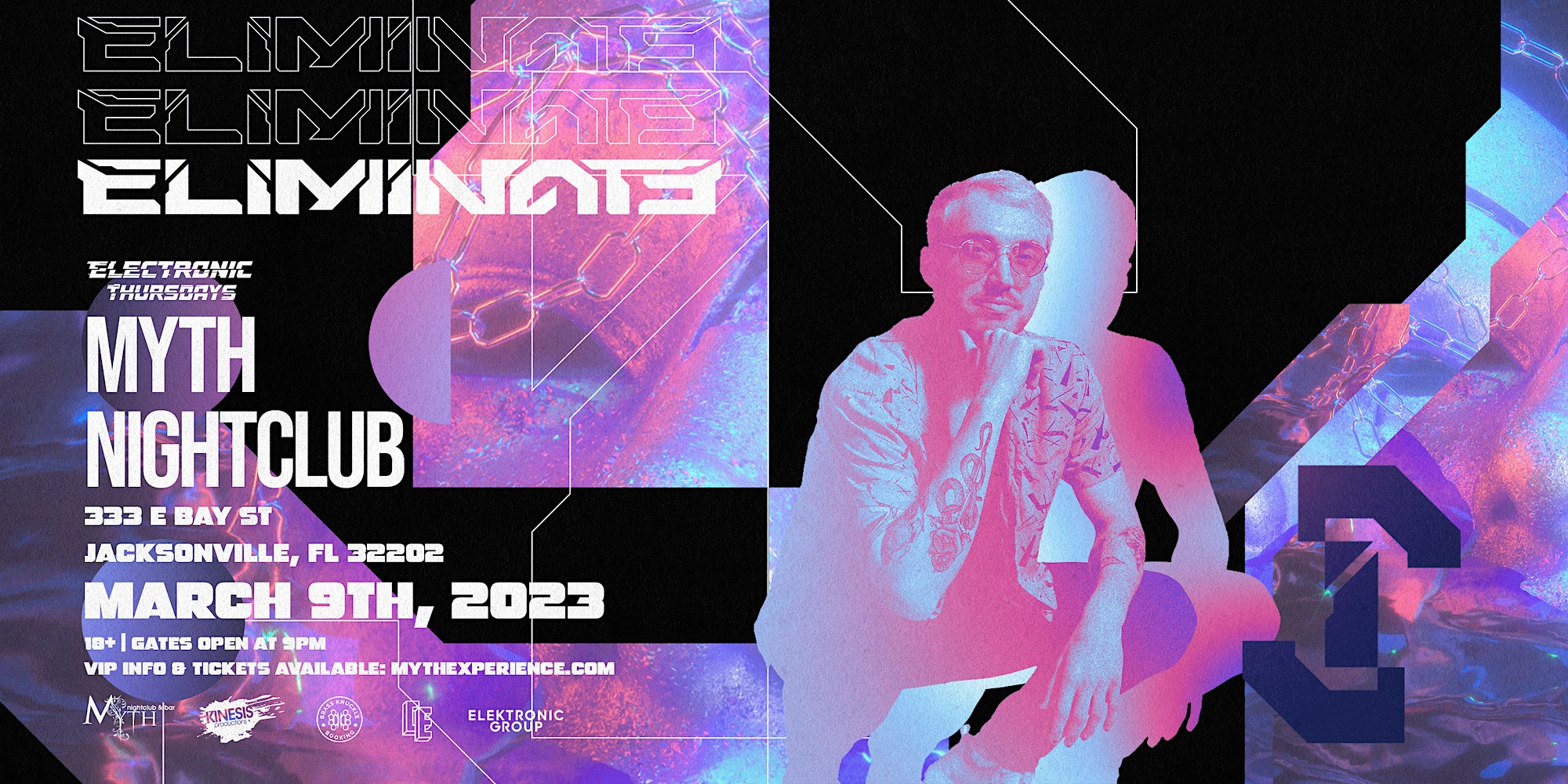 ELECTRONIC THURSDAYS PRESENTS
ELIMINATE at Myth Nightclub
From industry newcomer to the scene’s resident trendsetter, Eliminate has set a new precedent
for innovation in dance music. Since signing to Disciple’s exclusive roster in 2018, Eliminate’s
been on an upward trajectory. Throughout his discography, Eliminate has bounced across the
genre spectrum, dabbling in dubstep, electro house, trap, and drum and bass, all the while
maintaining his unmistakable signature sound that landed him on Disciple’s roster in the first
place.
In 2019, Eliminate released his Cyber Whale EP, including his hit tracks “Weeble Wobble” and
“Them” feat. Virus Syndicate that went on to be in the top 10 most-played tracks at EDC Las
Vegas; “Weeble Wobble” was the 10th most-played electro house track of the entire year. That
same year, Eliminate dropped his eclectic Dead Sea EP along with collaborations with Barely
Alive, PhaseOne, and more. He’s taken his sound on tour with artists such as Sullivan King,
Downlink, Dirt Monkey, and the sold-out Disciple Takeover concert series. Beyond his mettle in
the studio, Eliminate stays connected to his audience with a killer social media presence that
keeps fans on their toes.
Headed into the new year, Eliminate already has his next moves lined up: his first release of
2020 is an electric, four-on-the-floor remix of Valentino Khan’s “Pony,” soon followed by his first
release on RL Grime’s imprint Sable Valley Records. Additionally, he’s gearing up to release his
long-awaited collaboration with DJ Diesel, better known as Shaquille O’Neal. Eliminate’s sound
has influenced the current state of dance music in 2019 alone — his next move is sure to bring
about the next trend for 2020
L﻿isten to Eliminate on Soundcloud – soundcloud.com/eliminatemusic
——————————–
LOCAL SUPPORT TBA
——————————–
Info + Tickets:
Doors: 9PM-2AM
Download the Myth Nightclub iPhone App: mythexperience.com/app
VIP Bottle Specials All Night Long:
Please see the seating chart here : http://mythexperience.com/vip-areas/
Looking to be a vendor at the show?: https://www.mythexperience.com/vendors/
Myth Nightclub: 333 E Bay St. Jax FL 32202 | http://mythexperience.com | 904.330.1964
Myth Gates Open at 9:PM | 18+ Welcome
Element Bistro Open for Drinks and Dinner Starting at 6:PM
http://mythexperience.com/
By Purchasing a ticket, or attending Myth Nightclub, you agree to the Covid-19 Terms